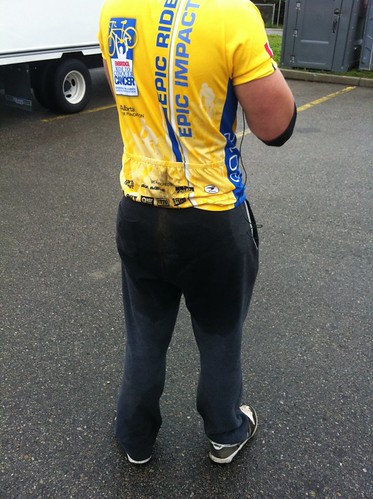 Before I get to the ride, I do want to mention that there’s still a few more photos from China that I’ve not had the chance to post, and some wicked pictures from the badlands in Drumheller that will be posted in the near future as well!

If you’ve followed my blog or know me, you might remember that I was participating in the 2012 Enbridge Ride to Conquer Cancer this year! It was June 23rd and June 24th and it was EPIC.

Prior to our ride we saw that it was potentially going to be raining all weekend. A small part of me was really excited knowing that this 200+KM bike ride was going to become an even greater challenge both physically and mentally.

Enter ride day! Saturday June 23rd, it was chilly in the morning, lightly raining, but everyone on our team was in great spirits and ready to ride! We all had raised at least $2,500 to participate in this experience, banking on some amazing friends/family and generous companies for donations.

We pedaled, it rained, we pedaled harder, it rained harder. One of my team mates had brought a mountain bike (I was lucky to ride it for a while) letting him use my road bike for a break, but it was too much for him and at the 90km mark he had to be swept in. This is about the same time where the weather was clearly not on our side and was out to challenge us. My girlfriend Allyn was simply inspiring. The last 30KMs were some of the toughest parts of the entire ride, combining poor weather and hours upon hours of biking and we were really put to test! Allyn pushed hard and forced me to keep pace, it was exciting, challenging, and so rewarding finishing the day so strong.

Here’s a shot of how every body’s butt looked 5 minutes into riding. Here’s a picture of me, my gf, and Chris early on in the first day. Arriving to camp we realized that we weren’t done yet.There was mud EVERYWHERE! Luckily our camp had hot showers, they were glorious and we had double packed our bags in garbage bags so our clothes were dry! (Unlike our tent) 😛 We were all smiles once we hit the showers! Day two there was no stopping us! It rained all night, the tents leaked, we were wet prior to riding and it was straight GO time. Unfortunately my team mate was still having quad issues so my girlfriend and I decided to go non stop. We hit the first check point (25KM) in grabbed some food and kept on trucking. Shortly after we ended up hitting some heavy rain that both of us felt like  it was quickly going to turn into hail, luckily for us it stayed as heavy rain. About midway through we hit our triathlon portion of the ride… All jokes aside we literally got to plow through a flooded highway that had 8 inches to a foot of water flowing across, it was awesome!

Here’s me and my beautiful girlfriend midway through the second day. The final stretch was thrilling, satisfying, and was a great cap to this awesome journey we all embarked on. We rode in together strong, and finished riding raising each others hands.

Oh and a special thanks to all the volunteers who cheered us on, provided food, fixed bike issues, and made sure we were all really well taken care of, this whole event wouldn’t be possible without those amazing people!